I’ve been working with Cosmos DB a fair bit recently, so check out my previous posts around partitioning and cross partition queries.

We have created our Cosmos DB service, database and collection (using a specified partition key), detailed link for this via CLI is here

Great so now we build our .NET Core app, grab the Cosmos SDK and build a connection in code, I reused most of this from the Cosmos DB BulkExecutor library for .NET sample, which as the name suggests is a great library for importing a lot of data. I was looking for 10M+ documents for this project so needed something that could get that done in a hurry.

To Console or not to Console?

This code originally started life as a simple console app, this is the last commit before I changed tack.

It was nice and all, but it would take a far bit of time to load the documents from my machine over the network.

Yes! I know I could have used the Data Migration Tool but I would not have learnt anything, and that is what this is all about.

So I thought, what would speed this process up?

If I could run my code closer to the database I could reduce the network latency, but also wanted something that could scale out to run in parallel…Durable Functions!!

Azure Durable Functions allow you to write stateful functions in a serverless environment. I was fairly sure running a single Function to insert 10M documents would exceed the 10 minute execution limit, so what if I used Durable Functions to batch up my requests and insert 1000 documents at a time, this could scale out and run in parallel.

So we start with a HTTP trigger function that kicks off the process and builds a Durable Orchestrator which is the context the operation will run under.

This is the Activity Task, the function that actually does the work with Cosmos. I use the Bulk Executor library as per above to do the insert of documents.

So this was great, I deployed my Function code and enabled Application Insights so I could see what was going on. The Function App started scaling out to run the import batches on multiple servers…it scaled out…and out …and out… Right about now was when I exceeded the 20K Request Units of Cosmos, so as expected the service started throttling and giving 429 response back to the Functions.

I guess I wasn’t expecting this to go so well (and catastrophically bad at the same time) so I didn’t have any retry or backoff handling in my application code. Durable Functions kept spinning up new instances and Cosmos kept throttling them, below is a screen shot from App Insights where you can see the outgoing requests match the outgoing dependency failures! This shows 82 servers running my Functions, this peaked at over 100 for a short time and really shows the power and scale of Functions. With that power comes great responsibility, which is non existent in my case! 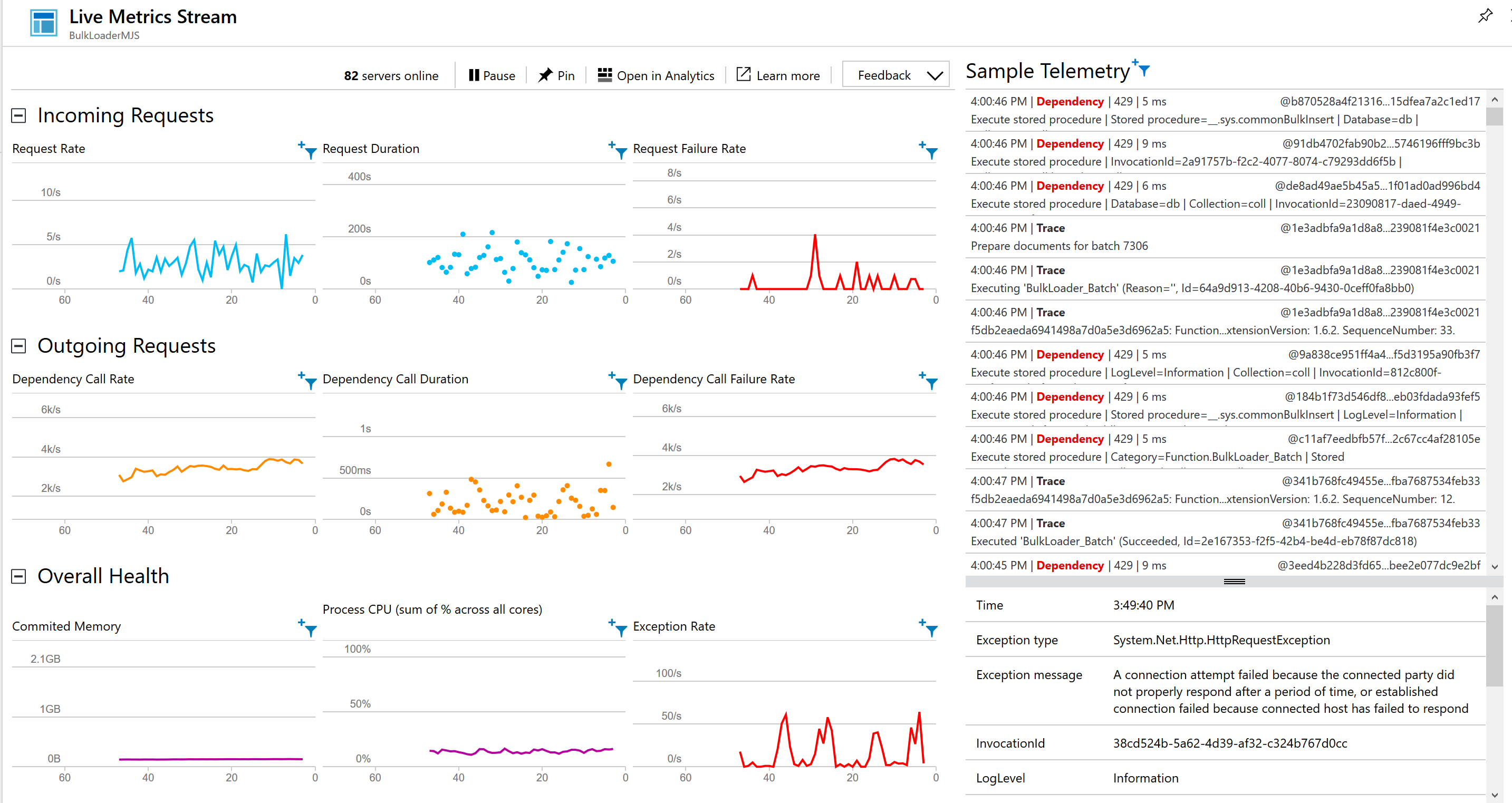 Ok, so I added some retry logic to the Durable Function, which sorted the issue with failed requests. I also tweaked the batch size and number of documents per batch, 1000 batches of 10,000 documents seemed to be the best result, but this was balanced with how much I wanted to scale Cosmos to cope, so there is definitely a balance to find.

This is the retry logic for the new Orchestrator Function